When you think of the Rolex Submariner you think of a classic symbol of style, utility, aquatic uses, and the quality standard for which all other tool diving watches are measured. So it’s no wonder why the British Ministry of defense commissioned Rolex to make a limited batch of custom submariners for naval military use.

From 1957 to 1966 then again from 1971 to 1979 Rolex was commissioned by the Ministry of Defense to produce robust watches for special forces military use. The submariners they produced became known as the “MilSub” or officially as the Rolex A/6538 and eventually the Rolex 5517. Based originally on a 6538 submariner they were modified both by Rolex in house and there after at the hands of the British government. The original modifications included a crack resistant larger 5513 style bezel made out of nickel silver (a copper alloy of 60% copper, 20% nickel and 20% zinc) instead of the 6538’s plated brass (just copper and zinc) the larger, taller bezel allowed gloved divers better gripping ability, the case backs were engraved with the war department arrow, military branch, unit and year of issue, and the case featured non removable 2mm spring bars allowing for the use of a NATO style wrist strap only. The NATO strap being the least likely to separate the wearer from the watch during the most inopportune time. The dials featured a very readable 3, 6, 9 layout and an unusually tall Rolex coronet. The dial, hands, and luminous bezel dot were also modified after delivery from Rolex by the Ministry to remove the unsafe radioactive radium and re-lumed with tritium, a less radioactive material. A large encircled T was pad printed on the dial to indicate the modified use of luminescent tritium instead of the highly radioactive radium. These are technically aftermarket dials. 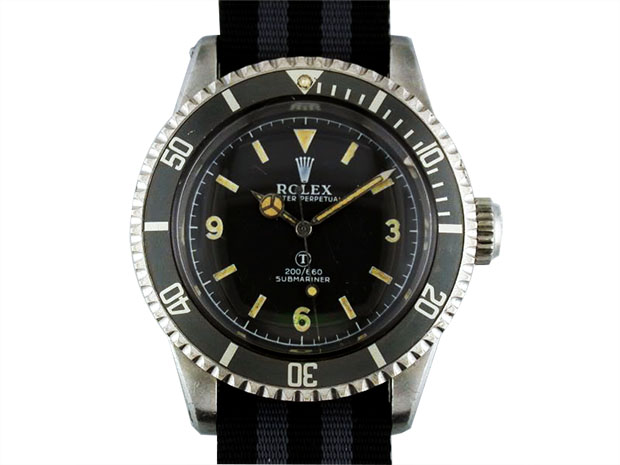 After 1967 Omega supplied the British military with the Omega Seamaster 300 till once again in 1971 Rolex was contracted to supply Submariner based watches to the Ministry of Defense. By then the new style of Submariner had been released and these new MilSubs were based on the Rolex Submariner 5513. This new MilSub ref. 5517 saw almost all of the same modifications carried over from the earlier A/6538 with some additional changes; the 5517 had easier to read large sword hands and an arrow style second hand, the bezel insert now had a complete set of 60 minute hash marks and the bezel ring was made entirely of stainless steel. Tritium was also now the standard for all Rolex dials but the 5517 dial still received a large encircled ‘T’ denoting the presence of tritium instead of radium. 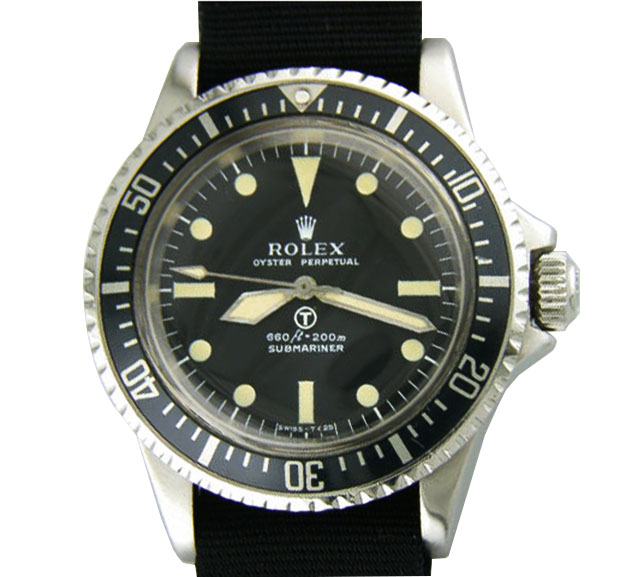 These MilSubs were once standard issue equipment from the British Ministry of Defense. They are now one of the rarest collectors watches ever.

A recent Bonhams auction saw the sale of one such 5517 MilSub for a final price of $155,000 USD. This same 1977 MilSub had been on Antiques Roadshow a year earlier with quite a different estimated auction value. (~$55,000)

that clip can be viewed here

Unfortunately the one sold had a standard submariner service hand installed by Rolex instead of the original arrow style second hand that would have come on the watch. Even something that simple probably effected the sale value by several thousand dollars.

For its short 9 year production run only 1200 Rolex 5517 MilSubs were produced, 180 of which are accounted for surviving the perils of daily service, making them exceptionally rare. The fact that modifications consist of more than red lettering on the dial and a few extra words on the case back make them truly a point of interest and a personally unique historical Rolex that is the grail watch for many enthusiast collectors and military historians, combine those two collecting passions and oh boy, this is the piece to have.