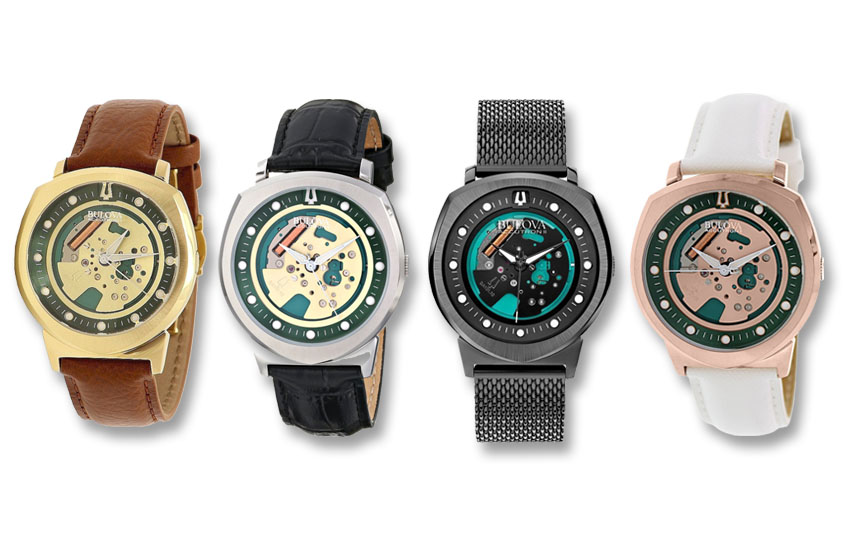 It’s been almost 40 years since the world has a seen an electromagnetic Accutron watch in a shop window. But 2014 marked the return of the Accutron Spaceview watch to the mass market with the hopes of capturing a new generation of curiosity and rekindling the mass appeal of the original in collectors who may remember the famous Accutron displays of the 1970’s.

I’ve always had a soft spot for Accutron watches and Bulova as a brand, its deep rooted history in watchmaking dates back to over 140 years and boasts a historically rich American heritage full of countless milestones. Bulova kept pace with other high end watch brands and ironically even started the electric watch revolution, with the worlds first electric watch, the Bulova Accutron. The Accutron, being a portmanteau of “accurate and electronic” featured a revolutionary “214 movement” consisting of a tuning fork and a transistor instead of a balance wheel to regulate the timing. The Accutron had a guaranteed time keeping accuracy of within 2 secs a day (12min /year. considerably better accuracy than most other watches of the time period) this allowed it to be the first watch to qualify for railroad certification in the U.S. Bulova produced the popular Accutron line with the 360Hz tuning fork movement for 17 years until it ceased production in 1977 due to the cheaper more accurate quartz watches that were becoming available from Japan. Over the next three decades Bulova would make quartz watches and also some higher end pieces with ETA based automatic movements under various other brands (Wittnauer, Caravelle). 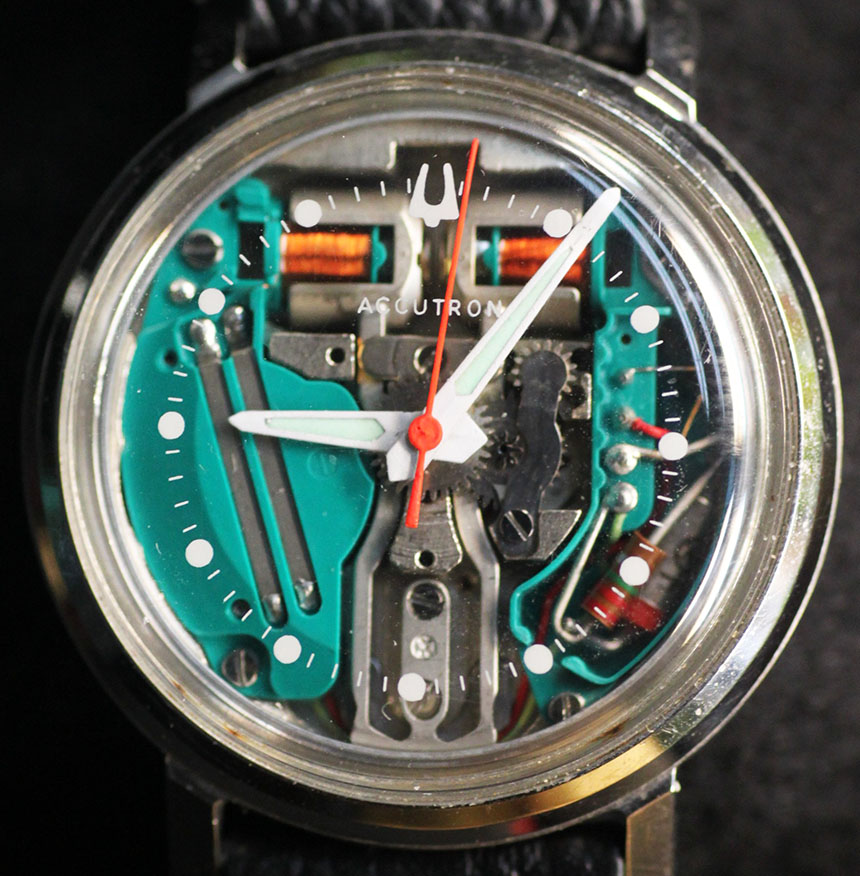 The original Spaceview Alpha lacked a dial, instead showing an exposed 214 tuning fork movement with the hour markers being on the underside of the plastic crystal in orbit floating above the movement. Photo by JCW -CC LIC

Lots has changed over those three decades, and in 2008 the Japanese watch company Citizen purchased complete ownership of the Bulova brand and all its sibling brands. Not wasting much time with their acquisition in 2010 citizen decided to relaunch the Accutron brand as a highly accurate electric watch with the novel sweeping second hand that made the Accutron famous. Citizen called this new watch the Accutron II or Accutron Precisionist. While this new Accutron sporting a Citizen movement is not an electromagnetic tuning fork based movement like the original 214 it contains instead a piezoelectric step motor that moves at an ultra high frequency of 262kHz (16 beats a second or 57,600bph twice that of most Swiss automatic calibres). The trademark hum however is absent from this new movement which was a major characteristic of the original Accutron watches. 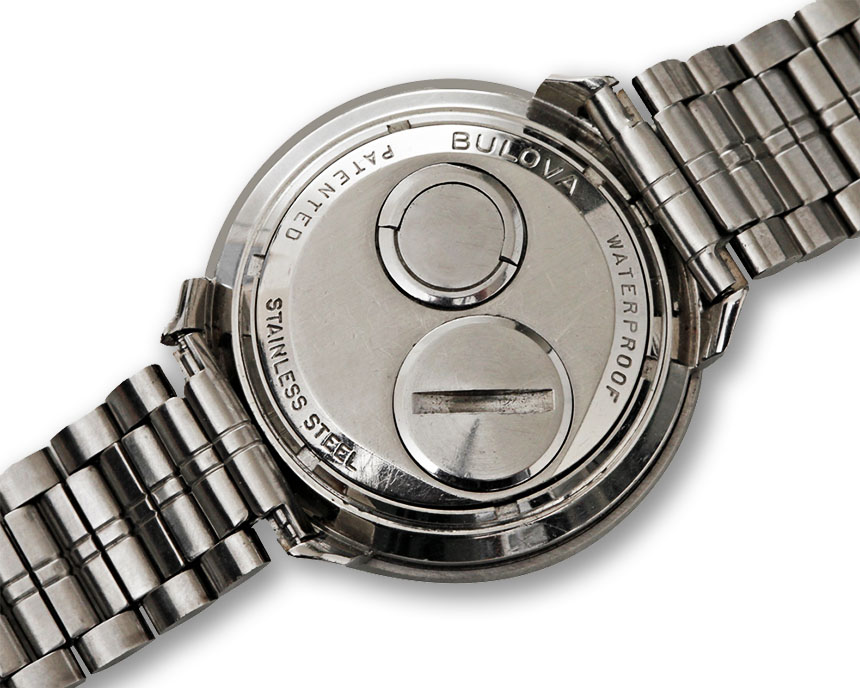 The time setting crown on the original Accutron watches was awkwardly placed on the case back and was cumbersome to operate.

One of the ways Citizen is making use of this new trademark is with the heritage models, as paying tribute to models of yesteryear seems to be very much en-vogue this decade. (which admittedly I am a fan of; black bay, sixty-five, pan-euro, giugiaro, seamaster 300, fifty fathoms, JLC deep-sea, to name a few, almost every brand has a heritage line this decade) It only makes sense Bulova would follow suit, riding off the success of one of their most well known and most iconic models. So in 2014 they re-released the Spaceview Alpha. 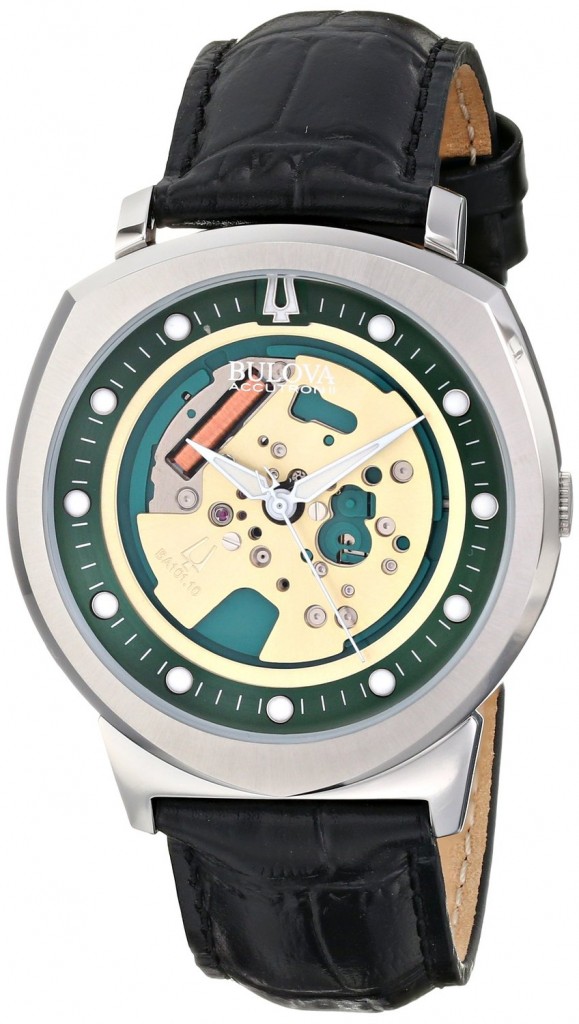 This seems to be Citizen’s strategy for the Bulova brand, by having it pay back some of its $250M acquisition, by using Bulovas past successes in a quasi attempt to capitalize off of what made the brand special and what made it good.

The 2014 Spaceview; the Spaceview II or Spaceview reissue or Alpha II (model. 96A155 reviewed) as it’s actually called is a tribute watch that pays homage to that original Spaceview from the 1960s, and it comes in 4 variations: Steel on Black leather, Gold on Brown leather, Black on Black Shark Mesh steel bracelet and Rose Gold on a White leather strap.

From a distance the new Spaceview looks very similar to the original with a bubble dome crystal, a polished shield shaped case an exposed movement and the hallmark smooth running second hand, but that’s where the similarities seem to end. The exposed Precisionist movement appears actually rather bland, and consists mostly of a movement main plate and a single exposed coil (the stepping motor). The original Spaceview had symmetry to its appearance with dual exposed coils on the left and on the right. The hands on the modern Spaceview are almost exact copies of the hands that were found on the original but Bulova instead opted for a tuning fork counter balance on the second hand for the re-release instead of the tear drop shaped one found on the original. The dial hour markers are printed on a flange inside the watch rather than on the underside of the crystal or on a transparent dial, much like on the later model Spaceviews. Disappointingly Just like the original though the lume on this reissue is quite weak and not readable in dimly lit environments. The new Spaceview makes setting the time easier with a crown that is recessed in the side of the case at 3 o clock. This recessed crown serves to preserve the clean lines of the case shape, mimicking the original sleek crown-less case that had the crown on the case back. The Precisionist movement also has a hacking function, making synchronizing it to the timenist clock an easy task, unlike the original. The crystal on the new Spaceview is a hardened mineral crystal and there is a lot of crystal to this watch, it does feel a little cheap being glass and tapping it with your fingernail makes a tinny ringing noise. The original had a plexi crystal and i feel the target age demographic for the Alpha II would not understand the appeal of a plastic crystal, but a Spaceview purist would probably welcome the acrylic crystal on this piece (much like on the manual wind Speedmaster). The leather strap and double folding deployment clasp leave a bit to be desired as the pin on the clasp is the only bit holding it all together while on the wrist. This lends itself to a high probability of pop-outs, and you will want to fit a better strap asap. Time keeping accuracy of this watch is claimed to be within 10 seconds a year, but anecdotally has been found to be more typically within 30-90 seconds a year, with a stated battery life of between 2 and 3 years. 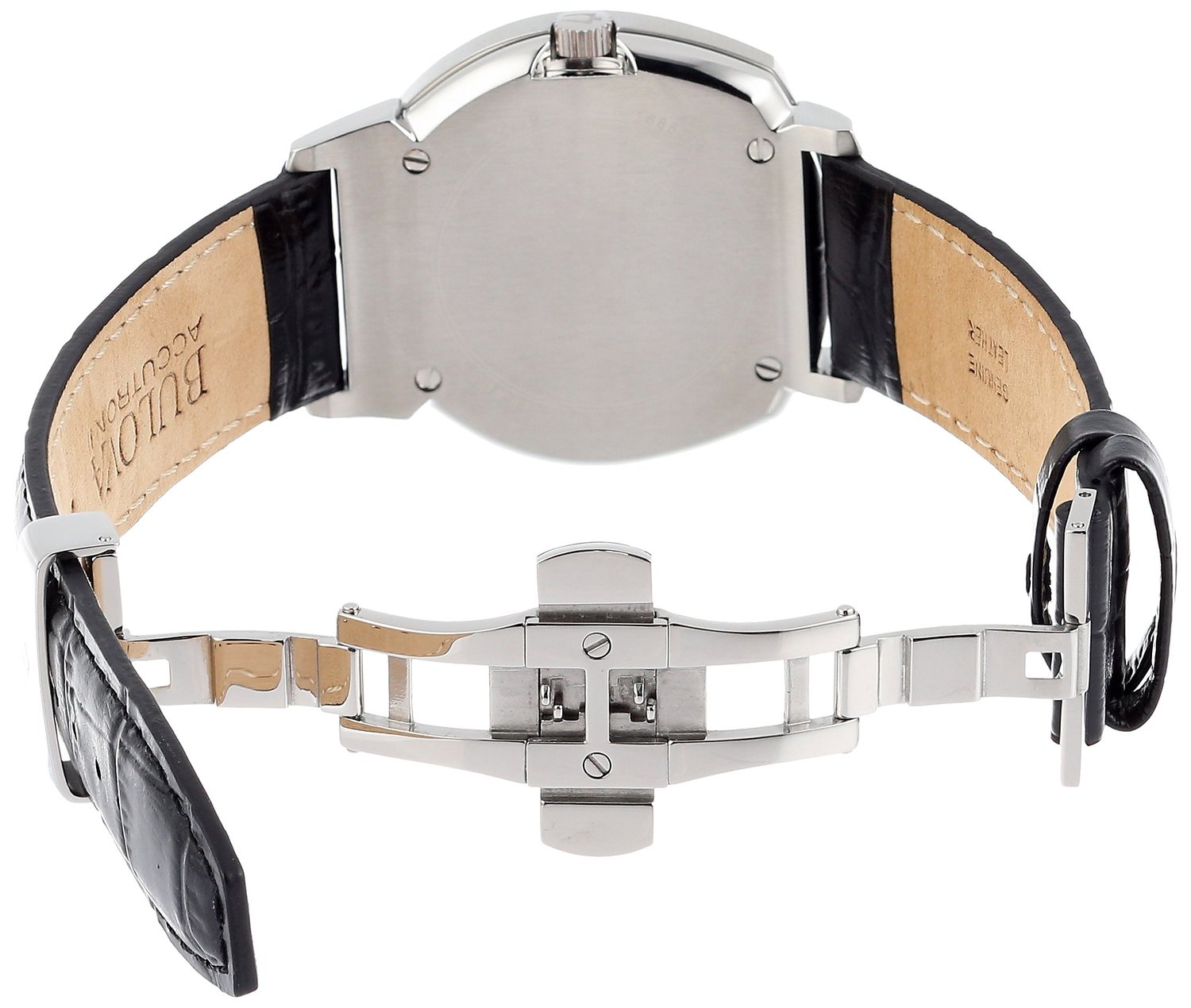 Alpha II model. 96A155 Case back and leather deployment strap

The watch overall does look stunningly great on the wrist and it is different from most other watches out there, it is in fact a really intriguing reissue. It’s something we have to reconnect with the iconic Spaceview of the past but I do feel the original captures the imagination a lot a more, while this new iteration has to live up to its predecessors legacy. It will only, and can only, ever, be compared to it as its really nothing new, and improves upon nothing. It is therefore an amalgamation of the best design aspects the Spaceview saw over the years and I am especially fond of the chapter ring hour markers, the tuning fork seconds hand and the fact that the shield case has returned (with the reissue having an easy access discreet crown).

The Alpha II appears bigger than it actually wears, coming in at 42mm it doesn’t feel like a 42mm watch, and that is perhaps due to its rather light weight. It’s not a heavy watch or a feather weight quartz either but a comfortable middle of the road wrist warmer. The crown feels a little on the small side, and rather than a tuning fork logo etched into it, it would have been neat to see a tip of the hat to the old style 214 crown instead.

All is not roses though, in the execution of this watch they should have used better materials, then it could have been something really special (like the 2010 limited edition Spaceview replica from Bulova). I feel they got the design mostly right, but had it been a truly special reissue that was done with the proper attention to detail and higher grade materials they would have had buyers willing to open their wallets even above the current asking price of $570. At it’s current price point of $400-to about $570 I would have liked to see a watch with a sapphire crystal, Super-LumiNova on the hour markers and hands, (which should be the minimum standard in this decade) and a better strap / locking clasp. 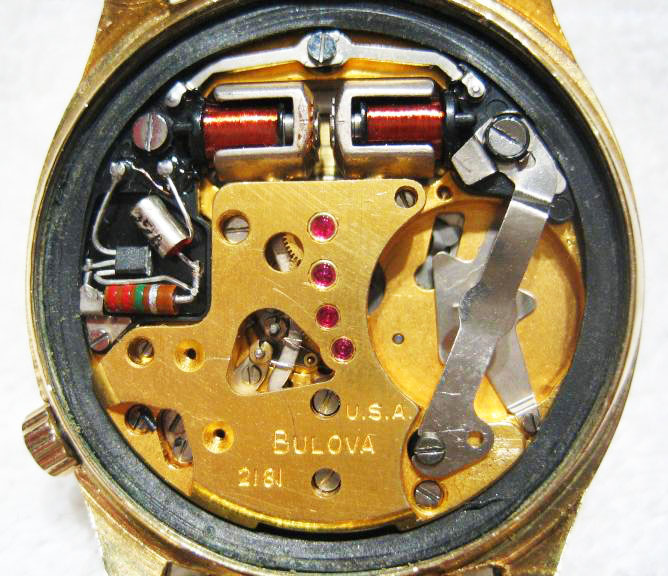 It may be a personal preference, but there is something very soothing about the symmetry of those original tuning forks and the fact that everything that can be seen through the front crystal is shown, resistors, wires and all. That alone makes it more interesting. (218movement) Photo by Jim Rees -CC LIC

A retail price of $250-$300 is exactly where I feel this watch should have been priced and I believe you are paying a premium for the uniqueness and the heritage that it represents. But don’t get me wrong, it is a fun, low maintenance buy that is truly unique and a point of conversation with a history to back it that is a whole other point of conversation all on its own. But that being said, if you’re chasing the past with what was and what this represents why not buy the actual legend? Some of the original 50 year old calibre 214 Spaceview Accutrons can be had for $300-$600 or even less in excellent running condition (the availability of replacement parts going forward though, who knows). The original Accutrons also represent a historic piece of Americana, as that’s where most were made, developed and headquartered. Bulova still maintains an office in NY city, but you can be certain a lot of parts come from Asia and are most likely assembled there as well.

Bulova can still reclaim their once reverent reputation as a fine watch making company and could even rise to be regarded on par with the likes of Hamilton or Tag Heuer. As of right now I feel Bulova is more of a fashion watch brand aimed at those below the age of 30. This new Spaceview II though, is evidence they got the amazing design of Bulovas heritage models to fall back on, they just have to make them worthy of carrying the Accutron name and not just banking on it to carry them forward.

Accuracy:
Anecdotally 30-90 secs a year (due to its design it is less accurate than the quoted 10secs/year of other Precisionist Accutron II movements, temperature variation also effects accuracy)

Where’s it made:
Asia / Swiss made (case back and possibly case)

All is not lost, Bulova did make a true reissue of the Spaceview back in 2010, with a limited production run of 1,000 pieces individually numbered and at a cost of $4,000 per piece. These were true legitimately sanctioned replicas of the original in every aspect (save for a sapphire crystal), and were done to commemorate the 50’th anniversary of the Accutron movement. These true Spaceview Accutrons prove Bulova could still make great watches, and here’s to hoping they issue these in larger numbers and at about half the $4k retail price.

Bulova has been going through the family tree and has a few other heritage models they brought back to life: The Accutron Snorkel; with a cool inner rotating chapter ring bezel functioning as a diving timer and the Accutron Astronaut… well sort of. “the MoonView” as its called, sans the 24 hour hand, which is a disappointingly absent.