On a random Tuesday in May a rare pink gold Patek Philippe ref.2499 sold for a cool $2.5 million USD.

The auction was held by the Phillips auction house in Hong Kong on May 31st and took 30mins of bidding to realize a final hammer price for this unpolished example… a staggering $2.5 million US. This rare Patek 2499 is described by the auction house as “one of the most sought-after vintage wristwatches of all time.” 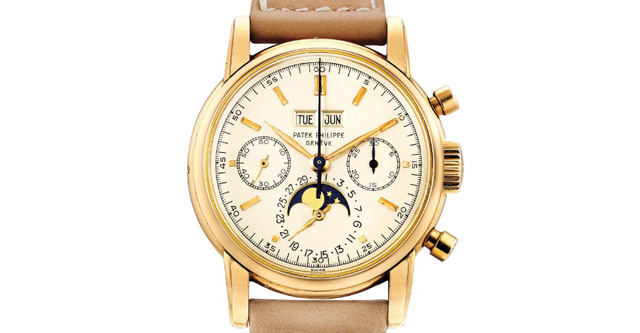 Over the 37 year production run ending in 1988 only 349 Patek 2499’s were made. If that’s not rare enough, the piece in question is only 1 of 6 known to exist that are cased in pink gold. It is also the second oldest of the six in existence being made in 1968. The dial on this watch is a white enamel that has aged to a very fine off white ivory color. Unlike the other Patek 2499 moon phase watches this particular example is missing the semi circle indentation that one would typically find on a moon phase dial like this, making it possibly even more rare as no others are known to exist.

This isn’t the first time this particular Patek 2499 has been on the auction block. It was last seen 13 years ago where it sold for almost $1 million Swiss francs.

While the price realized for this piece is nowhere near what the 1933 Patek Philippe Henry Graves Supercomplication went for in 2014 ($24 million USD) it’s still a staggering amount to pay for any one watch.